On October 10, 2015, the oldest English broadsheet in the Philippines, The Manila Times, celebrated its 117th anniversary. And as a way of linking its glorious past with the not-so-distant future, the Sunday Times Magazine decided to put the story of four The Manila Times College (TMTC) students on its cover. Basically, the story, entitled “Just in the nick of ‘Times’”, is about how the students of TMTC, namely Jemaima Rae Porter (3rd Year), Lance Gabrielle Librorania, Mamoru Tochizawa, and Nicolle Morales (all 1st Year students) were able to take a big step towards their journalistic dreams with the help of the scholarship grant from TMTC.

TMTC is an educational institution owned by the broadsheet, which offers an intensive three-year college degree on Journalism.

So, is there something wrong with the article? No, nothing, because helping less fortunate people is actually a good thing to do. Actually, it is just great that rich people or organizations take their part in building the future of this country.

Except when you brag about it –– which sends a feeling of being indebted to, the school and to the newspaper itself. There is a Filipino proverb which goes like this: “Hindi na kailangang malaman pa ng kaliwang kamay ang ginawa ng kanan (The left hand does not need to know what the right hand did)”.

Okay, maybe there is a need to inform aspiring journalism students about the scholarship grant, so that they may follow the footsteps of the four students. But doing so seemed to have added salt on the wound of the students. You don’t exploit people after helping them. You don’t rub it against their faces that if not for your deeds, they would have ended miserable.

The funny thing about the article, which makes me infuriated as well, is the extent or gravity of aid that the scholarship grant provides. According to the article’s subtitle, “The Manila Times College’s free education program saves four teenagers from shattered dreams”.

Did their lives depended on TMTC alone? Are there no other avenues aside from TMTC’s scholarship grant? 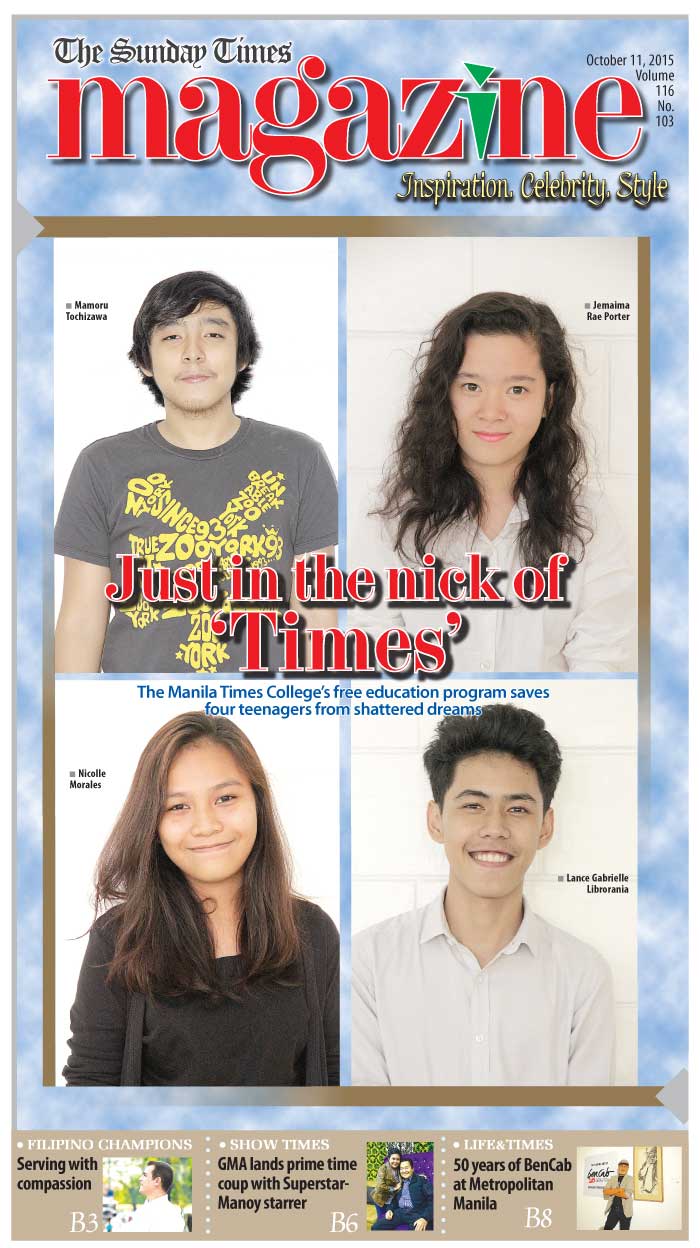 The cover of the Sunday Times Magazine. Photo from themanilatimes.net

So, maybe TMTC is the ‘proverbial’ “knight in shining armour” for these damsels in distress. Or maybe, the people behind these scholarship grants are the second coming of the prophets.

This is an ego-centric point of view. By saying that the free education saved these kids from shattered dreams, they only stopped short of saying that if not for them, Porter, Librorania, Tochizawa, and Morales would have been drug addicts. Or criminals –– because that is how shattered dreams appear to me. It means that they would have completely left their aspirations, and succumbed to bad habits.

The fact that it exposed the financial difficulties that some of the students face can be forgiven, because it is not bad to be financially challenged. Usually, problems emanating from money can bring out the best in a person. But to state their experiences of being traumatized, or quitting from a dream –– whether ultimately accurate or not –– is a form of shaming. The Manila Times capitalized on the stories of these students in order to sell something –– which is, a generous heart and a perceived quality education.

And oh, the issue of quality education. For a journalism student who transferred from the University of the East (UE) to TMTC last January 2013, I believe that the quality of education that TMTC provides is undoubtedly good. I was never challenged until I studied at TMTC. The college gave me a deeper sense of writing. Essentially, it made me a better writer.

But fast forward to 2015, and right now, I am starting to think if I made the right move.

It may be fair to say that as a person who has been with TMTC for more than two years, I know the differences in the quality of education that the school provides. When I entered the college, I was astounded with its curriculum. All the courses or subjects are inter-connected. For example, in the third term (January to April): in doing Business Writing and Reporting, a major class, there is a need for a thorough research, an ability to decode statistical data, and a knowing of economics. So, the other classes in that term are Communication and Research, Statistics, and Basic Economics.

However, since the college president, journalist and literary writer Dr. Isagani R. Cruz was filled with other duties, the college hired Monica Ang, daughter of The Manila Times’ Chairman Emeritus, Dante A. Ang, and sister of the Times’ Chief Executive Officer, Dante Francis Ang, to lead the college's administrative office. Since the start of the school year, Monica Ang made changes to the curriculum, which they vehemently denied.

Ang altered the original arrangement of classes, in order to give way to the foreign students who would be available to enrol only after August. Major subjects that were offered in the first term (June to early September) were placed in the second term (mid-September to December), so that the foreign students would not miss any important subject.

Also, from the start of the school year, every single course or subject was divided into two parts: the first part is the lecture proper, and the second part is field work or basically, beat reporting.

The result? It was a big confusion: because Ang placed primary and important subjects such as News Writing, Communication Theories, Introduction to Communication in the second term, first year students were clueless in what to do with their beat reporting.

They were assigned to do news articles, without being taught on how to do one, for God’s sake. Luckily, most of the professors at TMTC are a notch better than several journalism professors. These people gave them a crash course on news writing –– something that is being taught for more than a term.

The bigger problem though, is this: subjects in this second term also follow the structure that Ang created –– the lecture and the beat. However, there are instances where students have to do beat reporting or field work first, before the lecture proper.

When students taking Photojournalism protested, as they were tasked to take photos without being even taught of the basics of photography, Ang quickly shrugged off the fuss. Ang said that since I do video production and photography as a hobby, then I should already know what to do. She even dared, jokingly, to take a peek at the Instagram accounts of students in order to prove that they know a thing or two about photography.

Nothing against Instagram, but I can be sure as hell that photojournalism has to be a lot more serious than that. And why did I even had to pay the college when I can teach myself?

Sucks to know that I paid P3,000 for training myself to do news reports, not layouts. It is not the professor’s fault though: it is the curriculum’s fault. With all honesty, the brilliant professors at TMTC and my pending graduation are the only reasons to why I do not leave the college.

These revelations –– and assertions –– are a big risk for me, a graduating student from the said college. I do not know what happens after this. My girlfriend, who also studies in the same school, actually discouraged me from further voicing our opinions, since I bear a negative image. I am not a person who wants to be the talk of the town. And I personally think that all the bad rep I gained for fighting for students’ rights, are enough.

But still, I cannot be blind to all the stupid things around me.

My life inside TMTC was not beautiful, to say the least: I was tasked to spearhead an impromptu speaking competition which cost me my education, dignity and some of my hard-earned money, as I took all the blame for matters that I did not even needed to do. Friendships soured because of a power struggle inside a school paper which boasted (take note, past tense) a lot of potential. My graduation comes a year delayed, for the second time in my life. I got blasted for commenting on a stupid editorial that prioritizes the English language instead of Filipino or Tagalog, during the Buwan ng Wikang Pambansa.

But I do not hold any grudge towards the school, or the administration. It is just that I can see something gravely wrong, that I had to speak and criticize them again and again and again. In fairness to TMTC, I would thank them for coming up with a good roster of professors (except for one professor who does not even teach a single shit). I would thank them for showing this harsh reality. At least now, I know what is right and wrong.

And in my mind, I now believe that as stupid as I am, some of the things that I am saying are actually right. Besides, it would not have been me if I did not stand up against something that I think is incorrect. I just wish that they do not forget, that usually, the critic is the one concerned about the well-being of the criticized.

Oops, you forgot something.

The words you entered did not match the given text. Please try again.